CHICAGO, ILLINOIS (JUNE 26, 2018) — Award-winning online game developer and publisher Wargaming is proud to announce today the global release of World of Tanks: Mercenaries, the most significant evolution to date in the World of Tanks franchise on consoles. Available exclusively on PlayStation®4, Xbox 360 and Xbox One, World of Tanks: Mercenaries kicks off an explosive story campaign set in an alternate-history where World War II never ended. The new campaign features powerful new vehicles, unique hero crews, additional maps and more. Jump into World of Tanks now, and discover the global phenomenon that’s enthralled over 15 million players on consoles alone, or re-introduce yourself to a radical expansion to one of the world’s most popular free-to-play console games. There’s never been a better time to enter the World of Tanks. 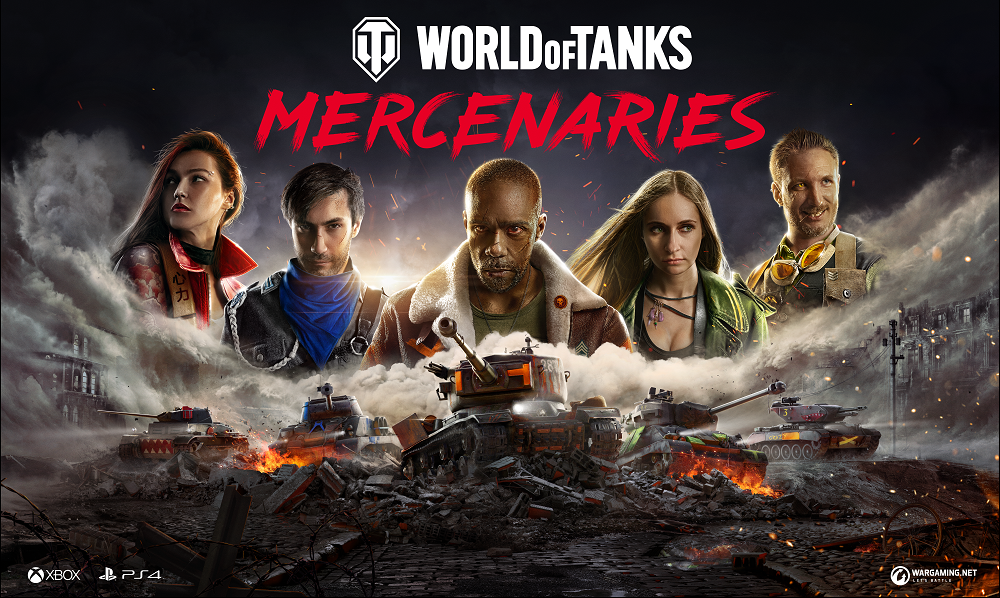 World of Tanks: Mercenaries invites players to join a new fight in a world where history has been rewritten and lawlessness has taken hold. Endless wars have left the world fractured, and in the vacuum of power left by the destabilization of global powers, soldiers and civilians fight for themselves, taking up contracts to become soldiers of fortune. Anyone can rise up and become their own hero in this new age of Mercenaries.

Combining the strengths of history’s most powerful war machines, the new Mercenary “nation” and Tech Tree were born. Mercenaries collect parts from captured and abandoned vehicles on the battlefield to create a new breed of tanks, giving players the opportunity to earn powerful, never-before-seen Mercenary vehicles through the brand new Contract system. Fulfilling certain in-game objectives, such as destroying a number of tanks from a specific nation in multiplayer battles, will unlock vehicles from the fascinating new armada. 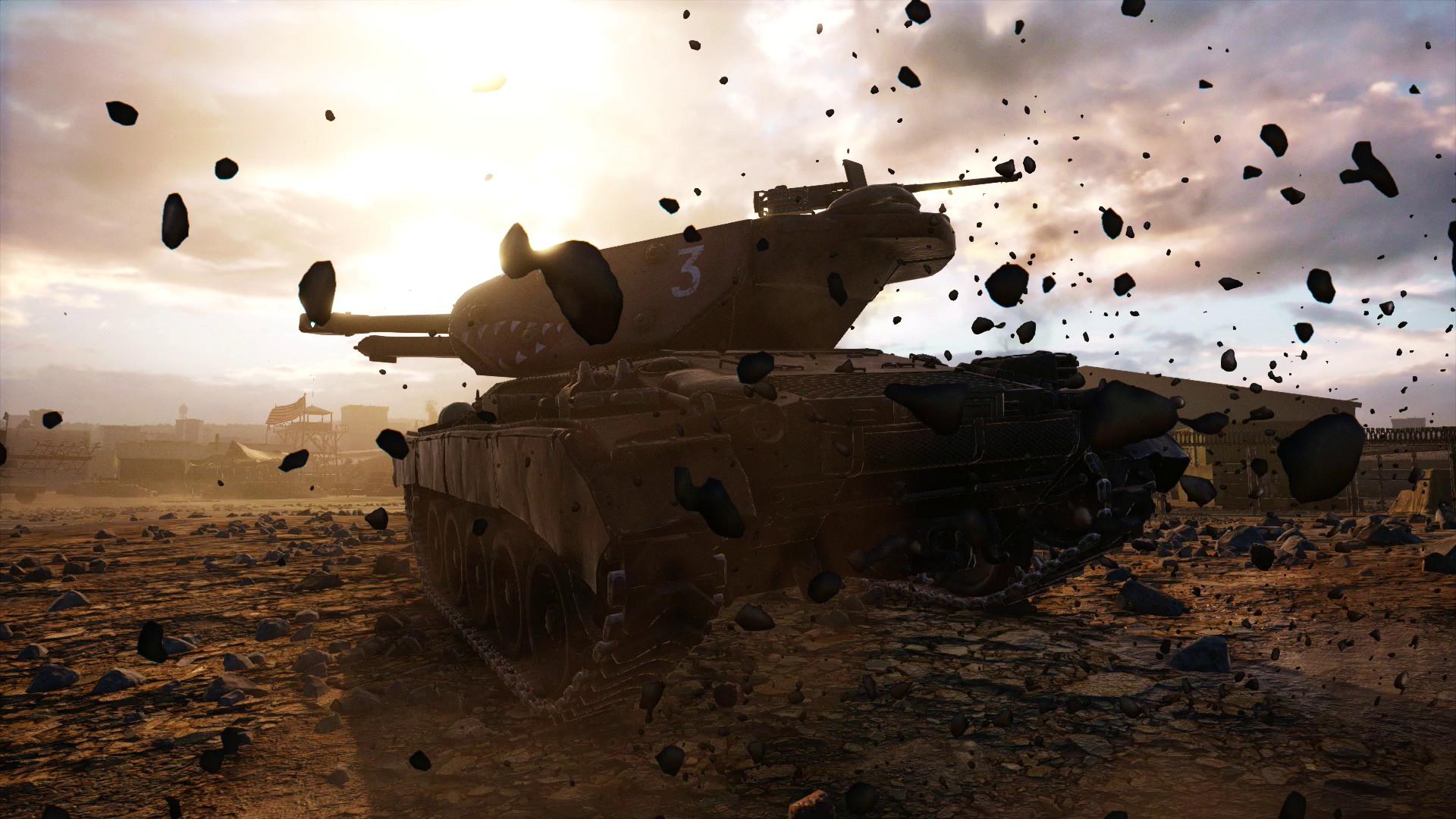 World of Tanks: Mercenaries introduces a unique Mercenary crew with their own backstories, playstyles and specialized vehicle. Want to unleash a hellish fury on your enemies with a Japanese freedom fighter? Storm Hunter is your woman — she rides into battle in the furious Heavy Tank, Needle. How about pestering enemies with an erratic and aggressive barrage of shells? Crazy Snake is your guy — get him with the mighty light tank, Stubbs! Five vehicles are available at launch, and the Mercenary nation will continue to expand its ranks in the weeks to come.

A brand-new console-exclusive War Stories campaign — The Heist — kicks off the Mercenaries universe, joining an existing saga of epic story-focused alt-history PvE missions. The Heist is an action-packed tale of espionage that follows a motley crew of Mercenaries contracted to set up, execute and escape from a raid on a secret war facility. Their mission is to steal nuclear material for a client who harbors his own atomic ambitions, but the crew soon finds itself at the mercy of the combined powers of the United States and the Soviet Union. Journey into danger with The Collector, Don Quixote and Borscht, and see if they can make it out alive with a paycheck in hand! Players can expect adrenaline-fueled tank battles as they tackle this story alone — like a true Mercenary — or band together with friends for co-operative online multiplayer action! The Mercenaries universe has a far-reaching impact across the entire World of Tanks game, with the addition of revamps to fan-favorite multiplayer PvP battle maps to fit in with the new world. Players can explore, fight through and discover the strategic intricacies of battlegrounds ravaged by war and time in eight new Mercenary-themed maps. World of Tanks: Mercenaries is the future of World of Tanks on home consoles. Expect more electrifying Mercenaries content in the future, including new additions to the Mercenary Tech Tree, new Crews, new maps and regular in-game events. For more details on World of Tanks: Mercenaries, visit:
https://console.worldoftanks.com/news/announcements/mercenaries/

World of Tanks Console is a team-based massively multiplayer online action game dedicated to armored combat, created by Wargaming West in Chicago, USA. Players immerse themselves in fierce 15-v-15 tank combat with opponents from around the world to fight it out on more than 90 different maps, and take command of their preferred vehicle out of over 680 different tanks from 10 nations. For the first time in the history of the World of Tanks series, a new Mercenaries line allows players to forsake nationalities and take the wheel on a new range of original tanks, exclusive to the console experience.

Redubbed World of Tanks: Mercenaries, the console-exclusive iteration of World of Tanks is played by more than 15 million players worldwide and is available on PlayStation®4, Xbox One, and Xbox 360. World of Tanks: Mercenaries can be downloaded for free by all PlayStation Network and Xbox Live account holders, with stunning 4K resolution and HDR support on PlayStation®4 Pro and Xbox One X. The epic, story-driven campaign mode War Stories can also be played for free, with regular episodic stories giving players the chance to rewrite history in immersive single-player and co-operative battles.