With the war on fuel becoming more and more towards electricity Ford turned around and made a play for the F-150 that I feel will pay off. This review is going to be short but sweet. We are talking about the new 3.0 turbo diesel engine in the new F-150.

This motor is what the F-150 has been missing. When you start the truck, you are greeted with the nice sound of a diesel but its not too loud as to announce to everyone around “Hey look I’m a diesel!” But if does turn heads, I got a few other truck guys talking about this truck.

One thing that did just blow me away was the fuel efficiency, with city driving I was averaging 8 to 10 L/100km which is better then most cars. I got about 800 KM out of a single tank which just blows me away for a truck. Now its not shocker that it was going to last as we all know diesel burns slower and generally does but with the added turbo, I wasn’t conservative with my fuel use.

Also, while reviewing this I pulled a 2014 Toyota Tacoma out of a ditch, moved a couch about 40 minutes away, and did my daily commute through the stop and go city traffic. I would not be surprised if Ford started putting these engines in the Explorer or Ranger. But time will tell. So, go to your local Ford dealer and give one a go! 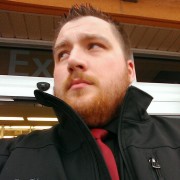 Behind The Wheel: 2018 Ford Explorer XLT vs Platinum