IRVINE, Calif., April 2, 2019 — FirstElement Fuel Inc announced today that it has secured $24 Million in funding to help fund the growth of its True Zero Hydrogen Network of retail stations in California, and thereby quadruple the company’s capacity to dispense retail hydrogen to customers of fuel cell electric vehicles.  FirstElement Fuel’s retail hydrogen network is the largest in the world today, and the growth funding from Mitsui Group’s U.S. based subsidiary Hy Solution, Inc. and Air Liquide, with each company providing $12 million, will expand its capacity from the ability to serve 7,000 fuel cell electric vehicles to more than 28,000 vehicles. 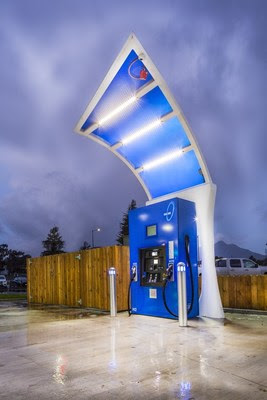 “American, Japanese, and French companies are coming together to invest in a retail hydrogen network that is the first of its kind anywhere in the world,” said Joel Ewanick, Founder & CEO of FirstElement Fuel Inc. “This shows the critical role that California is playing in a global energy transformation, and it’s based on a business case that allows us to expand and drive down the price of hydrogen fuel, all with a road to profitability and sustainability.”

As a result of policies and investments from the Energy Commission and Air Resources Board, the State of California has helped zero-emission hydrogen vehicles get an early boost.  Now California’s position as a global leader in fuel cell electric vehicle deployment is unlocking private investment dollars from multi-national companies such as Mitsui Group and Air Liquide as the hydrogen vehicle market positions itself for more aggressive growth. Leading up to this round of funding, FirstElement Fuel has grown its True Zero Network in California, today the largest retail hydrogen network in the world, with financial assistance from the California Energy Commission, Toyota, Honda, the South Coast AQMD, and the Bay Area AQMD.

“California is committed to developing a robust hydrogen refueling network that will support the deployment of zero-emission fuel cell electric vehicles,” says California Energy Commission Vice Chair, Janea A. Scott. “Private investments such as those announced today, represent a tremendous opportunity to accelerate California’s transition to a zero-emission transportation market, which in turn helps the state meet its air quality standards and achieve its climate change goals.”

Further bolstering the growth of California’s fuel cell electric vehicle market, FirstElement Fuel entered into a long-term supply agreement for liquid hydrogen with Air Liquide, who last November committed $150 Million USD of investment to build a hydrogen production facility for the zero-emission hydrogen vehicle market.  The use of liquid hydrogen for distribution and on-site storage significantly enhances the efficiency of FirstElement Fuel’s operations and puts the company on a path to significantly scale up the performance of its stations while reducing the price of retail hydrogen to the customer.

Currently FirstElement Fuel operates 19 of its True Zero retail hydrogen stations with 12 more under development.  The True Zero Network of stations spans from San Diego, throughout Orange County, Los Angeles, and the San Francisco Bay Area, and out to Santa Barbara and Lake Tahoe.  Since the opening of its first station in January 2016, the True Zero Network has completed over 300,000 successful fills, replaced more than 65 million gasoline miles with zero emission fuel cell miles, and avoided over 41 million pounds of greenhouse gas emissions (in CO2 equivalence).

Learn about our True Zero Network at truezero.com