BenjaminNovember 19, 2019No comment
TORRANCE, CALIF., NOV. 18, 2019 — Acura will put performance center stage at the 2019 Los Angeles Auto Show with a celebration of its dominant 2019 IMSA racing season, including a gathering of championship racers from Acura Team Penske and Meyer Shank Racing, and a display that will include examples of the championship-winning ARX-05 Daytona Prototype and NSX GT3 Evo and race cars.
15Views

TORRANCE, Calif., Nov. 18, 2019 /PRNewswire/ — Acura will put performance center stage at the 2019 Los Angeles Auto Show with a celebration of its dominant 2019 IMSA racing season, including a gathering of championship racers from Acura Team Penske and Meyer Shank Racing, and a display that will include examples of the championship-winning ARX-05 Daytona Prototype and NSX GT3 Evo and race cars. The show will also mark the debut of the new 2020 MDX PMC Edition, the second model in Acura’s lineup to get the handcrafted “PMC Treatment” at the company’s Performance Manufacturing Center (PMC) in Ohio. Other highlights of the Acura performance story include displays of the 2020 NSX in Indy Yellow Pearl and the stunning Acura Type S Concept, which sets the stage for the return of Acura Type S performance variants to the Acura line-up after a decade hiatus. 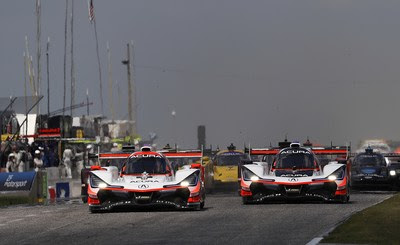 “It takes a lot of determination, passion and engineering excellence to earn the kind of racing success that Acura has realized this past season, and the L.A. Auto Show is a great venue to showcase Acura performance on the track and on the street,” said Jon Ikeda, Vice President and Acura Brand Officer. “We’ve got Acura’s next MDX PMC edition, the return of Type S and a whole lot more Precision Crafted Performance highlights coming in the year ahead, so this will be a really big auto show season for Acura.”

Acura Type S Concept
The Acura Type S Concept arrives on the Los Angeles Auto Show stage as the latest evolution of Acura design and a bold statement about the future of Acura performance, presaging the return of Type S performance variants to the Acura lineup. Taking inspiration from the Acura Precision Concept, the Acura Type S Concept is characterized by a wide track, low stance and expressive silhouette, showcasing a whole series of new or redesigned signature Acura design cues, including new JewelEye® LED headlights, “Chicane” DRLs and taillights, and a new open-surface Diamond Pentagon grille. Acura Executive Creative Director, Dave Marek, and Type S Concept designer, Ben Davison, will be on-hand in the Acura booth to provide a walk-around presentation starting at 11:30 a.m. on Nov. 20. The Acura Type S Concept made its world debut in August 2019 at Monterey Car Week. Following a decade-long hiatus, Acura will debut two Type S performance variants in the next two years. Full details can be found at: https://acura.us/TypeSConcept.

Acura MDX PMC Edition Debuts
The next model in the Acura lineup to receive the “PMC Treatment,” the MDX PMC Edition will make its production debut at the Los Angeles Auto Show. Like its TLX predecessor, the MDX PMC Edition will be hand-assembled by the same master technicians that produce Acura’s NSX supercar at the company’s bespoke Performance Manufacturing Center (PMC) in Marysville, Ohio.1 Deliveries of the exclusive 2020 MDX PMC Edition will begin early next year, with production limited to 300 vehicles to be built for the U.S. market and 30 for Canada. As MDX’s line-topping trim, the MDX PMC Edition combines the premium features of the MDX Advance Package with Super-Handling All-Wheel Drive™ (SH-AWD®) with the sporty character of the MDX A-Spec, and is distinguished by its deeply lustrous, PMC-exclusive Valencia Red Pearl paint utilizing the same nano-pigment technology as the NSX supercar. Full details can be found at: https://acuranews.com/en-US/releases/handcrafted-acura-mdx-pmc-edition-to-debut-at-automobility-la.

Acura NSX GT3 Evo and ARX-05 Race Cars
The NSX GT3 Evo made its racing debut this season in the IMSA GTD division. Acura’s show car on display at the LA Auto show features a custom-designed livery with yellow and blue accents over an exposed carbon fiber body. The NSX GT3 Evo’s bespoke chassis is built by the same team of master technicians who produce the road-going version of NSX at the Performance Manufacturing Center in Marysville, Ohio.2 The 3.5-liter twin-turbocharged V6 racing engine uses the same design specifications as the production NSX, including block, heads, valve train, crankshaft, pistons and dry-sump lubrication system, and is assembled in the dedicated build room established for the NSX engine at the Anna Engine Plant in Anna, Ohio. The race-winning NSX GT3 Evo is offered for sale globally at a starting price of approximately $525,000. More information on the NSX GT3 Evo can be found at AcuraClientRacing.net.

The Acura ARX-05 championed Acura’s return to the competitive world of prototype sports car racing in 2018 with legendary partner Team Penske. Competing in IMSA’s DPi division, the ARX-05 is powered by Acura’s race-proven AR35TT twin-turbocharged V6, based on the production V6 that powers the Acura MDX, TLX and RLX. The AR35TT has powered Acura and its racing partners to wins at the 12 Hours of Sebring, the 24 Hours of Le Mans; an LMP2 World Endurance Championship in 2012; the American Le Mans Series LMP2 title in 2012 and 2013; and an overall victory at the Rolex 24, 12 Hours of Sebring and Petit Le Mans in 2016, as well as the 2019 Drivers’ and Manufacturers’ titles.

Five of the six models in the Acura lineup are made exclusively in central Ohio, using domestic and globally-sourced parts, including the ILX and TLX luxury sports sedans (Marysville Auto Plant), the RDX and MDX luxury SUVs (East Liberty Auto Plant) and the Acura NSX supercar, which is built to order at the Performance Manufacturing Center in Marysville, Ohio. Additional media information including pricing, features & specifications and high-resolution photography is available at AcuraNews.com. Consumer information is available at Acura.com. Follow Acura on social media at Acura.us/SocialChannels.